Were Pakistani flags hoisted in Jalandhar? Here's the truth about this viral video

A video is doing rounds on social media with a claim that Pakistani flags are being hoisted in Jalandhar.
” #Sikhs Fly #Pakistani Flags In Jalandhar #India On Top Of Their Houses.” the caption read.

#Sikhs Fly #Pakistani Flags In Jalandhar #India On Top Of Their Houses.

When NewsMobile fact-checked the viral video, we found the claim to be false.
We found another video of the same incident and noticed that the flag in the video was different from the flag of Pakistan even though the claim suggested otherwise.

Pakistan’s flags are being flagged in Jalandhar Hindustan 🇵🇰 pic.twitter.com/qiDKhmf6hI

In the above collage, we can see that the Pakistani flag has only one white stripe whereas the religious Islamic flag has one white and a blue stripe.
On further investigation, we found a report Dainik Jagran on the incident. According to the report, the incident took place on November 4, 2019, when people called the police after mistaking the religious Islamic flags with the flag of Pakistan. 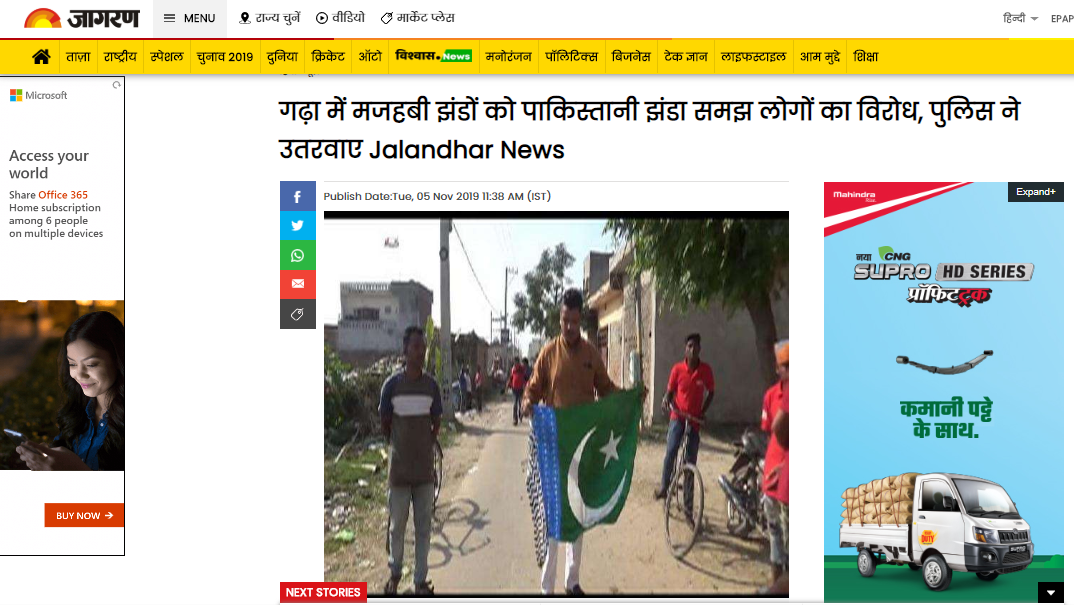 The report also states that the flags were hoisted by the Muslim Community for an event that is to be held on November 10 to celebrate Eid Milad, Prophet Muhammad’s (or Mohammad’s) birthday.
The same incident was also covered by Dainik Bhaskar.
The above information proves that the flags hoised in Jalandhar were not Pakistani flags.

Did Alka Lamba put Congress’ symbol on her t-shirt? Here's the truth!