Shashi Tharoor was not clicked with Pak cricketers' wives; here's the truth

A picture of Congress MP Shashi Tharoor is making rounds on social media in which he can be seen with a group of women. It has been claimed that the women in the picture are the wives of Pakistani cricketers. 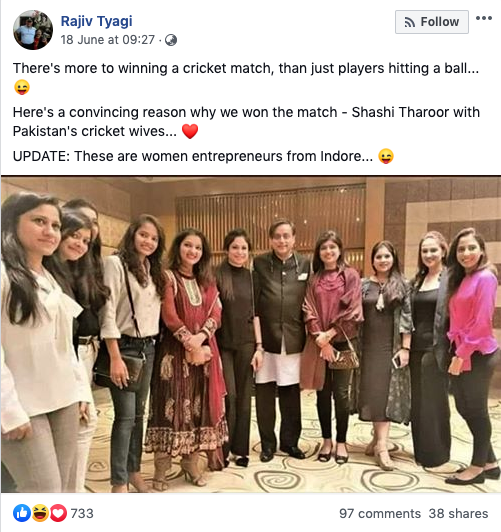 The caption with the picture read: “There’s more to winning a cricket match, than just players hitting a ball… 😜
Here’s a convincing reason why we won the match – Shashi Tharoor with Pakistan’s cricket wives… ❤️”

When NewsMobile fact-checked the post, we found that the claim attached to the picture is FAKE as the women in the picture are not the wives of Pakistani cricketers.
On putting the picture through Reverse Image Search, we came across a Tweet by Shashi Tharoor in which he had posted the above picture. In the caption, he had written: “With the women of Indore’s Entrepreneurs’ Organisation after a three-hour interaction tonight.”

With the women of Indore’s Entrepreneurs’ Organisation after a three-hour interaction tonight. (But the men asked most of the questions.) pic.twitter.com/4cJB5QoOtl

Hence, the above information proves that claim attached with the picture is false.

No! The volcano in the video is not Indonesia's Sinabung volcano

No! This yoga event did not take place in Japan; here's the fact check