Don't fall for these FAKE TV grabs; here's the Truth

A Facebook post that has been shared by more than 1,78,000 people shows several quotes by Congress President Rahul Gandhi on the template of a renowned media channel- ABP News Network.
According to the post, Rahul Gandhi said,” As soon as we come to power, we will load Rs 50,000 crore for the next 50 years, without any interest.” ( The quotes were written in Hindi )
The other one read “My ancestors were Muslims, I am a Muslim.”

The post also had a video of ZEE Hindustan where the anchor claimed quotes Rahul Gandhi saying that Congress is a party of Muslims.
FACT CHECK
NewsMobile used various methods to verify the claim. On reverse searching the images on multiple tools and using the ‘keywords’ search, we found out the truth behind these claims.
Providing a clarification on the post, ABP News Network in a statement said that these are doctored pictures.
“#Urgent: This is to notify that the attached media which is being circulated online has been doctored with our channel’s template. The information about Sh. Rahul Gandhi’s statements, which these images carry have not been reported by ABP & have no relation with ABP News Network,” the statement read.

#Urgent: This is to notify that the attached media which is being circulated online has been doctored with our channel’s template. The information about Sh. Rahul Gandhi’s statements, which these images carry have not been reported by ABP & have no relation with ABP News Network. pic.twitter.com/qYU2sJXqsl

As far as the other claim is concerned, of Rahul Gandhi calling Congress a Muslim party, the report dates back to July 2018.
In July 2018, a report by an Urdu newspaper The Inquilab quoted Rahul Gandhi as saying “Yes Congress is a Muslim party”. It courted controversy after a parliamentarian shared the clip. 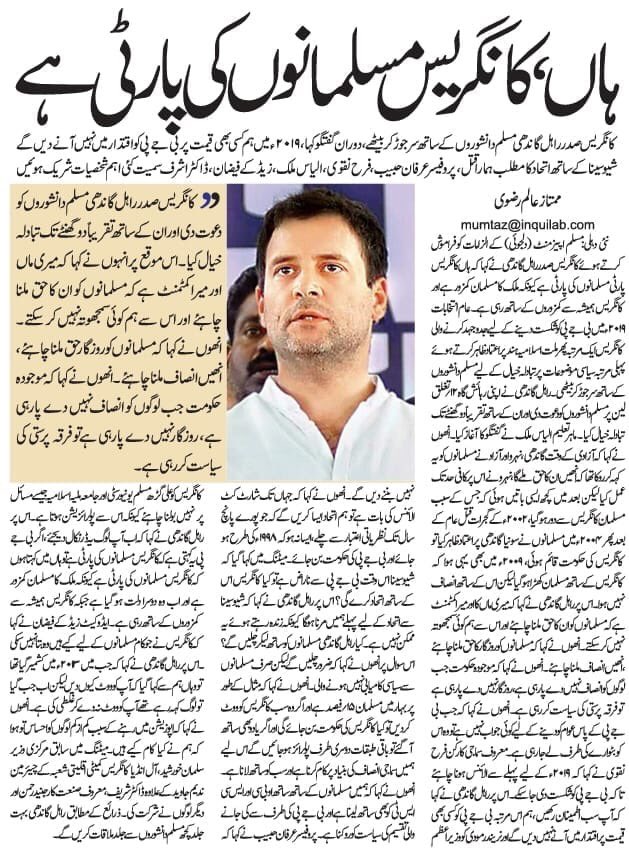 According to reports, the rough translation of the quote is, “If BJP says that Congress is a party of Muslims, it is fine. Congress is a party of Muslims because Muslims are weak and Congress always stands with the weak.”
Inquilab journalist Mumtaz Alam Rizvi later provided clarification on the report late, In an interview to ABP, he said ” Rahul Gandhi raised different questions…including the Sachar committee. [Educationist] Ilyas Malik started the conversation and said that in 1947, when India was partitioned and Muslims started to leave, then Nehru, Gandhi and Azad stopped them by saying that this will be a secular country…”
“Rahul Gandhi said that mine and my mother’s commitment is for Muslims to get justice and their rights. And if we have made a mistake somewhere then we admit to it…” Rizvi said.
Condemning the reports by the publication, Congress Spokesperson, Priyanka Chaturvedi said claimed, “This is absolute lies & shameful spin by the newspaper.”

This is absolute lies&shameful spin by the newspaper. The BJP using it to further its own agenda, yet again, exposes their desperate tactics to mislead the nation. However this will not deter us to fight for India’s founding principles& its democratic values. https://t.co/EN15vL7oNa