While Indian athletes are making country proud by winning medals, the whole nation is hailing their achievements. In the midsts of that, All India Mahila Congress had to face an embarrassing moment as congratulated the women team in Asian Games but used a photo of the Year 2014 wrongly.
The Tweet read: “Heartiest Congratulations to women’s 4 X 400m Relay team on winning Gold medal at #AsianGames2018.”
They have deleted the tweet now but this is how the tweet looked: 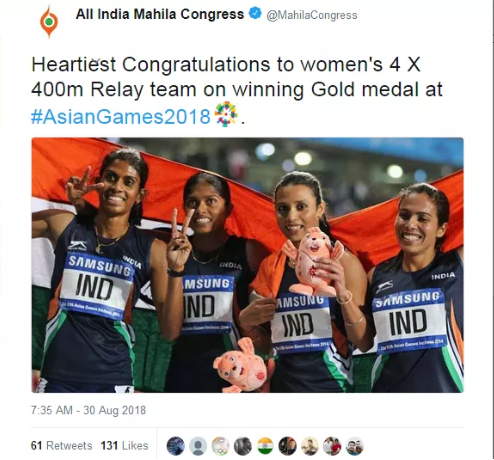 In fact, the official Facebook page of All India Mahila Congress shared the same image and still didn’t delete the post.

ALSO READ: Terrorist was not arrested at Jaipur airport; don’t believe the hoax

When we put the image through Google Reverse Image search, it was revealed that the picture was of the similar Asiad event but in 2014. The image is of 2014 Asian Games when Indian eves clinch 4x400m relay gold.

President of India, Ram Nath Kovind, congratulated the women’s team for winning the gold in a tweet.

Congratulations to our Golden Girls – Hima Das, MR Poovamma, Saritaben Gayakwad and Vismaya Koroth for winning the Gold in the Women’s 4x400m Relay at the @asiangames2018. Daughters of India continue to make us all proud! #PresidentKovind pic.twitter.com/rhC4L3tAse

No need to worry, banks won't be closed for six days in September

America's Got Talent sequence was NOT choreographed to 'Sandese Aate Hai'