Ahead of inauguration, photoshopped image of Statue of Unity goes viral

As the world gears up for the inauguration of the tallest statue in the world- Statue of Unity, the reports of several protests have also come into light.
While the tribals were protesting against the unjust done to them in acquiring the land for the state, an image of the statue is going viral on social media.
What’s different about this image? Well, the picture that went viral shows a poor family with the statue in the background. The mother can be seen feeding her children.
The image was shared by the verified page of Aam Aadmi Party USA on facebook. The post has been shared by 1,877 people till now.

Dilip Mandal, whose Twitter description reads ‘ Journalist, Former Managing Editor, India Today. Author of bestsellers like ‘Media ka Underworld’ and ‘Corporate Media: Dalal Street.’ Jai Phule, Jai Bhim’ also shared this post. In the post, he questions if Sardar Patel would have ever agreed to take away the lands of farmers and tribals to build a statue of himself, had he been alive today. 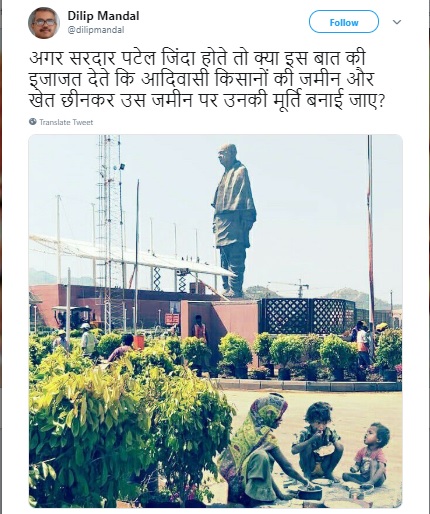 Fact Check
When you look at the image clearly, you’ll notice that image something about this image it odd. That is because the photo is photoshopped.
The family shown in this picture were virtually added. The image is Reuters pictures clicked 8 years ago- in Feb 2010.
The description reads – ‘Homeless children eat food on a footpath in the western Indian city of Ahmedabad February 26, 2010. India needs to review public spending and improve its fiscal position, Finance Minister Pranab Mukherjee said on Friday, kicking-off the presentation of his budget for the fiscal year that starts on April 1. REUTERS/Amit Dave (INDIA – Tags: POLITICS BUSINESS SOCIETY)’

This picture is not from Kashmir; here's the fact check of the viral post

The crowd did NOT chant 'Modi-Modi' during RaGa's rally, as this video claims